A desire on the part of beachgoers to capture the perfect photo may have cost another wild animal his life — and sadly, it wouldn’t be the first time such vain pursuits have proven deadly.

Disturbing new video has emerged showing tourists in San Bernardo, Argentina, clamoring around a baby dolphin stranded on a beach. According to the newspaper La Nacion, the animal had been carried from the water so people could get a better look.

In that time, the dolphin perished. 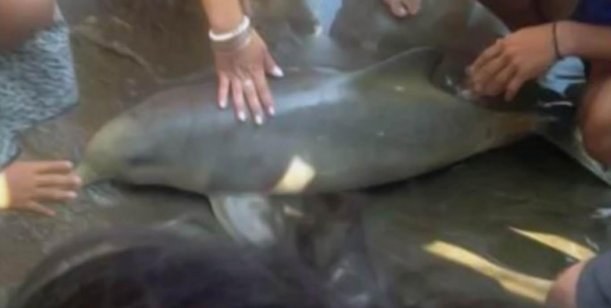 “They let him die,” a witness reportedly told C5N News. “They could have returned him to the ocean, he was breathing, but everyone started taking photos and touching him, saying he was already dead.”

It’s unclear if the baby dolphin was sick already, or to what extent the stresses of human contact contributed to his death. But the action of removing him from the water — and the inaction of others who didn’t put him back — leaves little little doubt that those present had put own their shallow interests ahead of the dolphin’s well-being.

The scene is strikingly similar to one which occurred last year, also on the coast of Argentina. During that incident, two dolphins were taken from the water by tourists and at least one died as a result.

Many had hoped that grim event could serve as a teachable moment regarding how to treat distressed animals — but evidently, the lessons of history can be too easily forgotten.

Is Cage-Free Really A Better Life For Chickens?