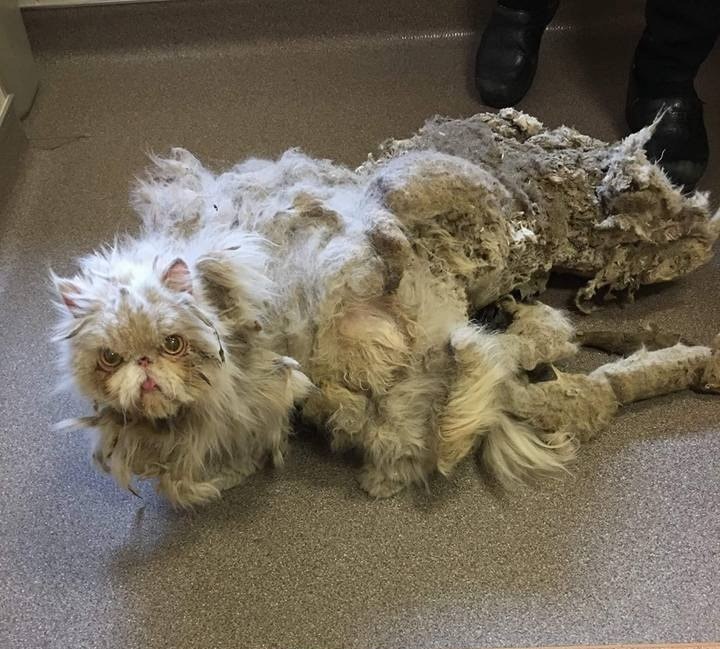 A nine year old Persian cat was found covered in five pounds of matted fur that looked like he was dragging a carpet.

His name is Sinbad.

When Sinbad the cat came to The Anti-Cruelty Society (in Chicago), the shelter staff was shocked by the amount of matted fur accumulated on the feline.

The Persian cat could barely move trapped in his own mats. He was very weak and didn’t show any appetite but yet he continued to be very friendly to everyone at the shelter.

“Sinbad came in to our shelter after a utility worker saw him in the home of an elderly gentleman. The man wasn’t able to care for himself very well, and that was evident in Sinbad’s condition,” Elliott Serrano told Love Meow.

The cat carried five pounds of fur “dragging behind him like a carpet.” 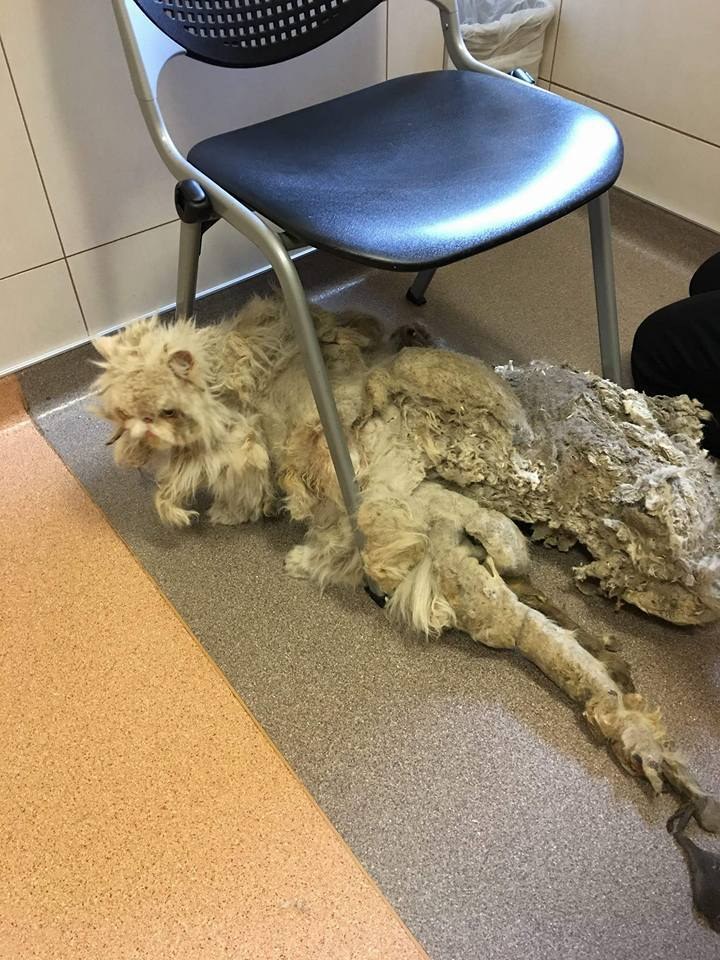 After the owner surrendered the cat to the shelter, the staff shaved him down and revealed a tiny, adorable cat underneath years of mats.

“He was so tolerant and sweet during the grooming which was grueling. It took hours,” Elliot told Love Meow. 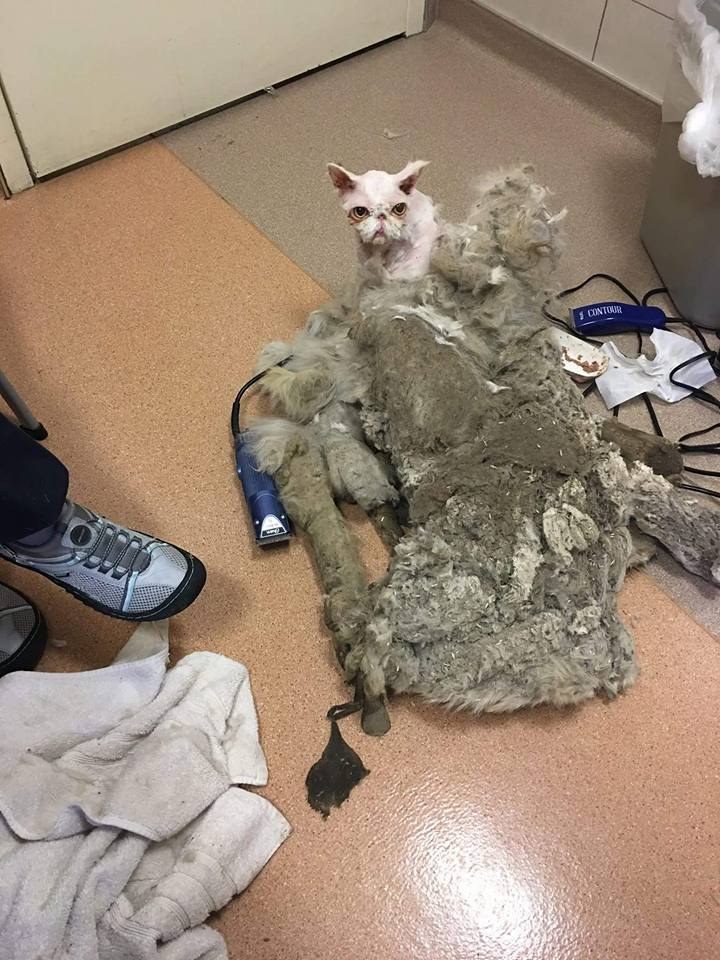 The Persian cat is nine years old, weighing under seven pounds. He was carrying more than half his weight in mats.

“Once free of the mats he just wanted to lie down on somebody’s lap or in his bed.” 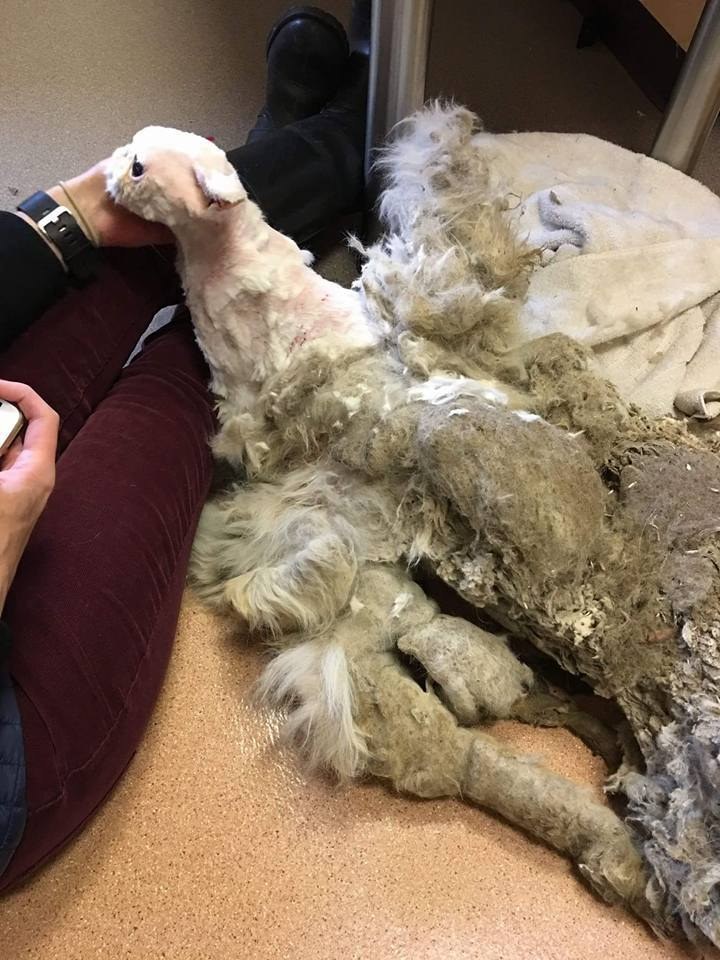 “We had to force feed him for a bit to make sure his digestive system would keep working and not hurt his kidneys.”

Within a week, Sinbad bounced back. 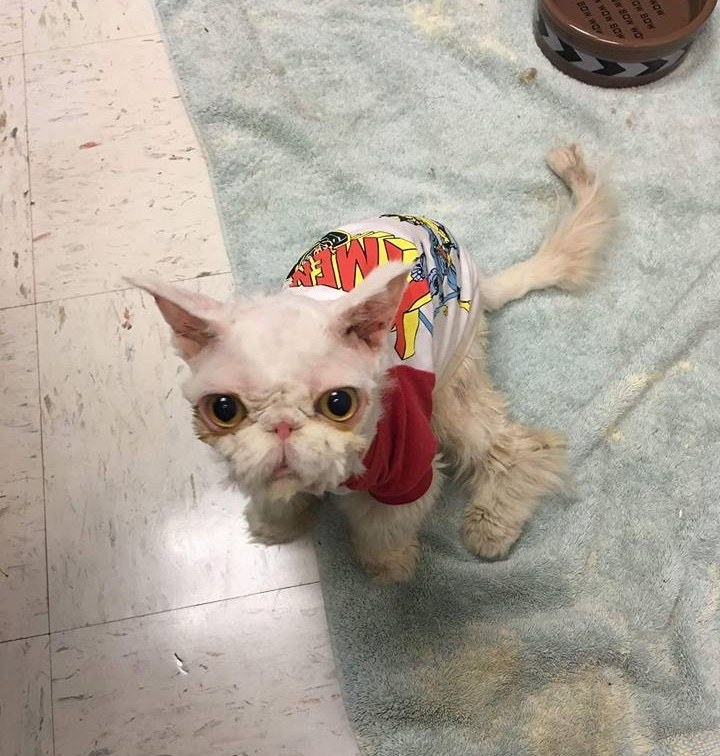 Elliot took Sinbad home to foster for the long holiday weekend, but on the second day at his foster home, Sinbad had a different idea.

He sat on Elliot’s chest and began to purr and chirp aloud. It was the happiest day he had had for a long while. Sweet Sinbad snuggled up to his foster dad and wouldn’t let go. 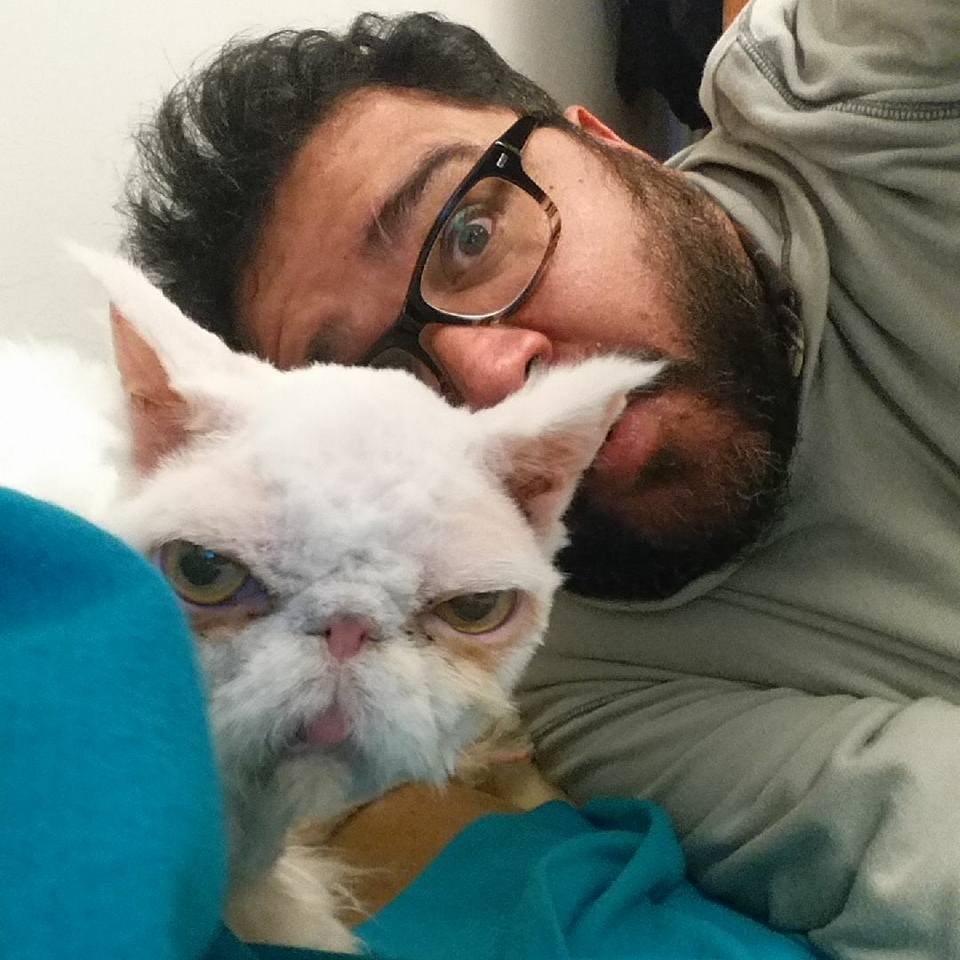 After that, Elliot couldn’t part with his sweet Sinbad. He’s there to stay forever.

“Now he’s getting lots of TLC and attention. His diet is being monitored and the goal is to help Sinbad gain weight and grow back his glorious coat!” 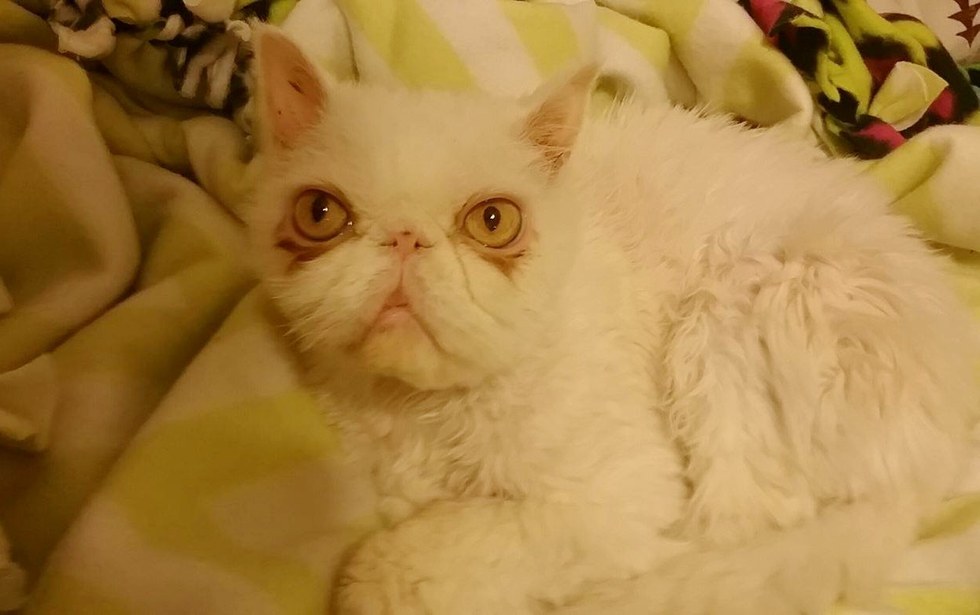 “He has recovered very well and for a cat of nine years, after going through what he has, is very friendly and frisky.”

What an incredible transformation! 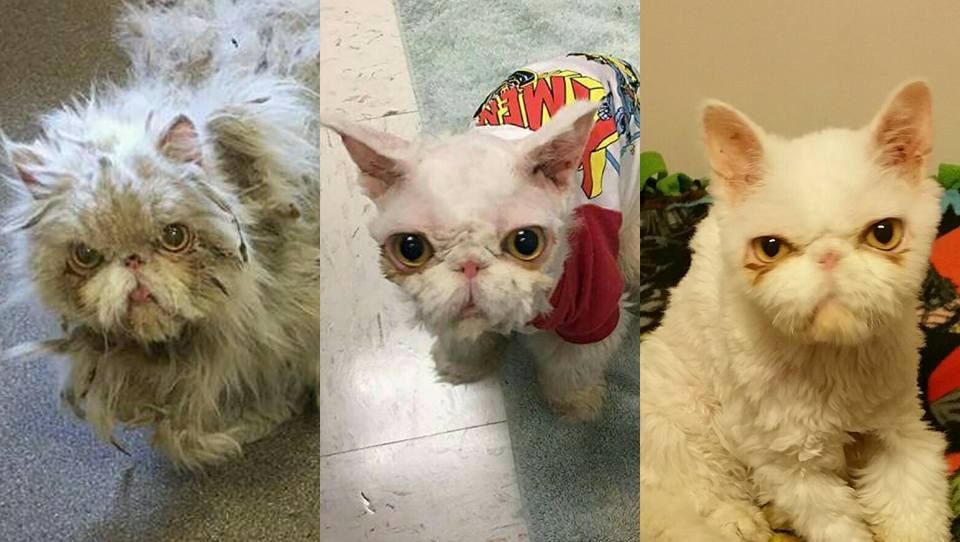 Despite what Sinbad has endured, he continues to love and trust.

“I’m just astounded at how he just loves people, even though people haven’t always treated him very well,” Elliot told Love Meow. “It’s a lesson we could all learn.” 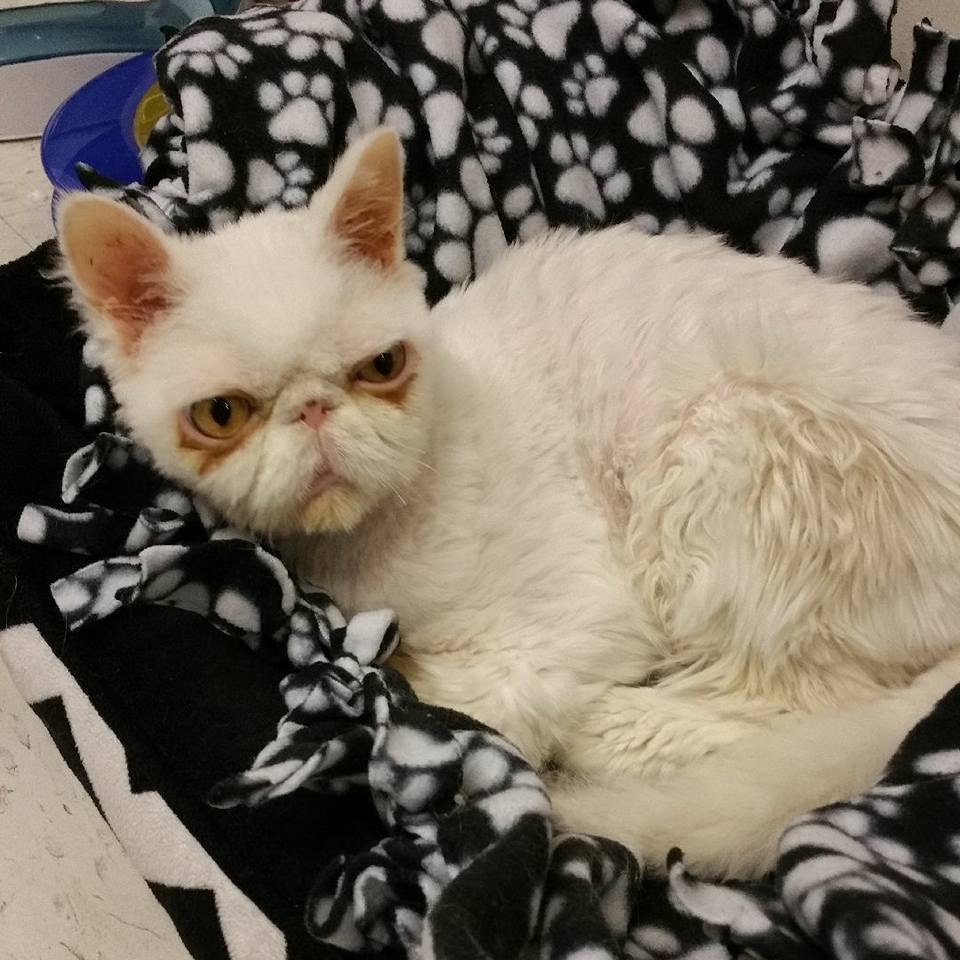 How To Avoid Buying Leather Purses & Shoes Made From Dog Skin

Tiny Hummingbird Falls In Love With The Dog Who Saved Her

A Pig. Who Thinks She’s A Dog. Does Everything With Her Four Legged Family