A group of divers made a disturbing discovery last while exploring near the remote island of Kokoya, in Indonesia. 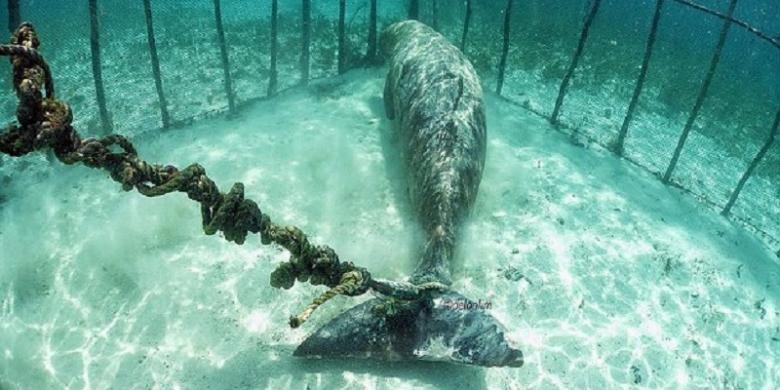 There, trapped inside cages on the shallow ocean floor, were two dugongs — rare marine mammals closely related to manatees.

One of the divers, Delon Lim, told The Dodo that the animals, also known as “sea cows,” appeared to be a mother and her calf held in separate cages. While the younger dugong was kept without restraint, the adult was bound by a rope wrapped around her tail.

The pair had been captured by a local fisherman, apparently to profit from tourists.

“He asked for some money if we want to see the dugong or take a picture,” Lim said.

Although it’s unclear how long the dugongs were held captive, Lim suspects they’d been trapped for more than several weeks.

“It seems so,” he said. “The ropes are worn and torn. The scars and the wound on her tail are so deep. It was very heartbreaking.”

The divers were allowed to enter the cages with the adult dugong, capturing photos and video of her unimaginable ordeal.

Not wanting the animals to continue suffering in that sad state, the divers tried to convince their captor to set them free, informing him that dugongs are a protected species vulnerable to extinction.

“When we left the island, the fisherman agreed to release them,” Lim said. “But since we were not so convinced he would, I posted the video to social media.” The other divers did as well.

And it’s a good thing that they did. Within hours, Lim was contacted by wildlife authorities requesting the location of the cages. The next day, officials descended on the spot and found the animals still trapped.

That’s when they were finally set free.

Dugongs, like their manatee counterparts, are considered at threat from human activities, though capture like this isn’t believed to be common. There are other animals, however, that are held in similarly deplorable conditions for the sake of tourism.

Click here to learn more about what animal attractions to avoid when traveling abroad.