When Cynthia Wang, a Dallas resident, visited the Dallas World Aquarium (DWA) with her family in September, she had no idea that she’d leave the aquarium determined to help free one of its animals.

“We were walking through and this black panther is sort of at the end of this route. He was literally in a glass enclosure about the size of my living room,” Wang told The Dodo.

The jaguar was “pacing back and forth and people were banging on the glass trying to get his attention,” Wang said. “He charged at the glass walls several times.”

“Jaguars at DWA have been exhibited in that Plexiglass container for years,” Carney Anne Nasser, senior counsel for wildlife and regulatory affairs at Animal Legal Defense Fund (ALDF), told The Dodo. “The DWA has had a lot of criticism over this issue.” 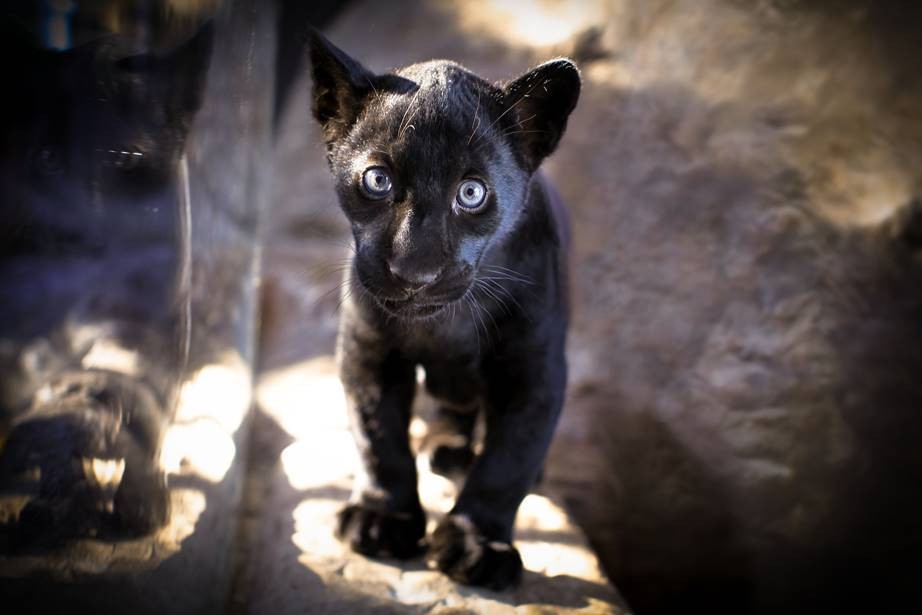 But DWA isn’t the only aquarium to have big cats. Another aquarium in Texas, Landry’s in Houston, houses four white tigers who haven’t seen the sun in 12 years.

The ALDF is currently pursuing a lawsuit against them, based on recent changes to the Endangered Species Act that require big cats like tigers and jaguars to be able to exhibit natural behaviors in captivity. There are also upcoming changes to the guidelines from Association of Zoos and Aquariums (AZA) about keeping big cats captive. If ALDF wins the lawsuit, B’alam’s life could also change. 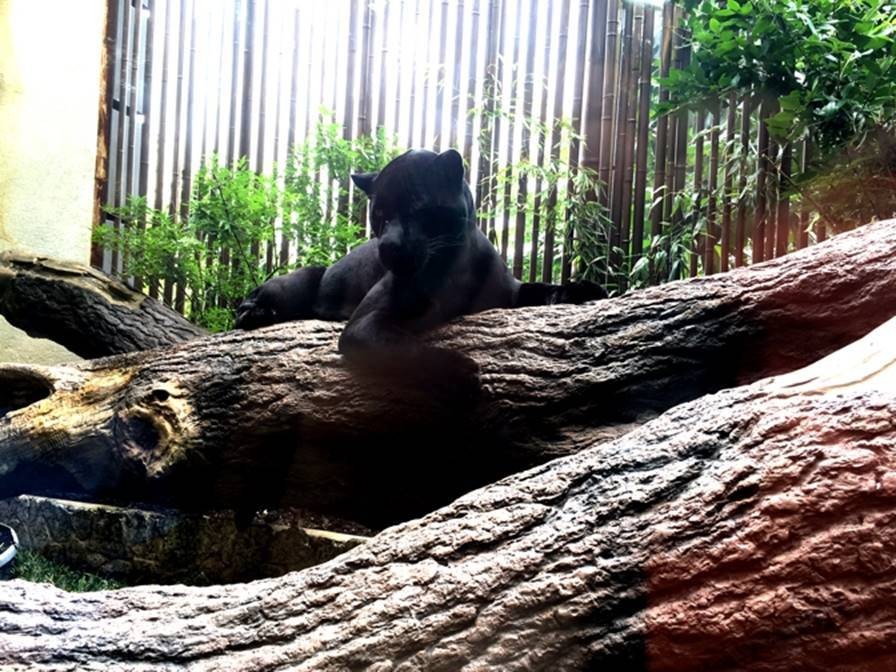 “If we are successful in our case against Landry’s relating to the tigers, then a victory could place pressure on DWA given the substandard conditions for jaguars (an endangered species),” Nasser said.

DWA insists, however, that the jaguar is perfectly fine where he is and that visitors aren’t getting a full picture of what B’alam’s life is really like.

“While the size of the exhibit may not be clear to our guests due to our efforts to make the space as natural as possible; there are three levels only one of which is the public viewing area,” J. Travis Coover, spokesperson for the Dallas World Aquarium, told The Dodo. Coover says the area visible to the public is what they call the “Temple of the Jaguar.”

Coover explained that there is a larger outdoor area with access to sunlight, fresh air and more room. “He can visit this area via the ‘tree ramp’ anytime he chooses,” Coover said.

“A third level below is the holding area,” Coover said. “During the day, our jaguar ambassador moves between the middle and upper areas … “He seems to find people equally as interesting as they find him, preferring to remain at the ‘temple’ level much more than we anticipated.” 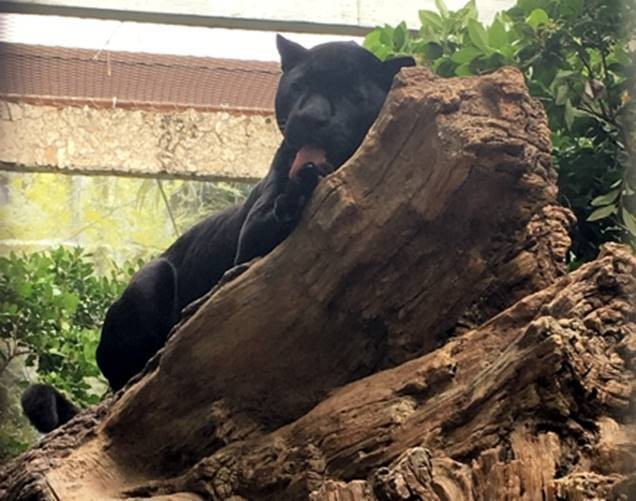 “At one point, he turned his butt to the glass and he sprayed on the glass,” Wang said. “It did not look like, ‘Hey, I want to be friends.’ Finally, he got tired of being angry, and so he went into the middle of the enclosure to hide … I left the place feeling sick to my stomach.”

Wang wasn’t the only one. Over 130,000 people have recently signed a petitiondemanding a better life for the black jaguar.

“I was actually fairly horrified at most of the exhibits in the aquarium,” Elisabeth Bacon, who started the petition, told The Dodo. “There is an animal stuffed into every spare inch of space. Many birds barely have room to even stretch their wings.”

Bacon visited relatives in Dallas last year who took her to DWA. When Bacon saw the black jaguar she was “horrified.”

“I was so disgusted I decided to start a petition, something I’d never done before,” Bacon said.

“Dear Daryl Richardson,” the petition goes. “Keeping a large panther in a small enclosure at your Dallas World Aquarium is irresponsible, cruel and inhumane. Large cats need large spaces to roam and exhibit natural behaviours. Please do the right thing and send your clearly miserable and depressed jaguar to an animal sanctuary where it can live out the rest of its natural life in happier surroundings.”

A history of neglect

This isn’t the first time Dallas World Aquarium had come under scrutiny for its animal welfare standards for its big cats.

A profile published last year in The New Republic about Daryl Richardson’s track record with exotic animals could help illuminate what this black jaguar’s life is really like.

A caterer and restauranteur, Richardson bought an abandoned warehouse in Dallas’s West End, which he opened in 1992 as the Dallas World Aquarium, a private for-profit institution. “I’m clearly out for the profit,” he told the Morning News when DWA opened.

One of the first jaguars at the aquarium was returned to the animal’s owner after he got suddenly sick. The owner said he discovered a toucan’s bill blocking the big cat’s intestine, suggesting he devoured the bird. The jaguar later died.

Another jaguar died under anesthesia, and, according to The New Republic, some employees thought it was because her heart was weak from the stress of captivity. The exotic cats at the aquarium have also turned on each other. In 2011, a jaguar attacked an ocelot, who lost his leg.

But the DWA says it considers the safety of its guests and the well-being of its animals “top priorities.” Coover said: “We are an AZA-accredited zoological park, among only 10% of the approximately 2,400 animal exhibitors licensed by the USDA, and have maintained this accreditation since 1997.”

It is true that there are many more unaccredited or “roadside” zoos in the U.S. than accredited zoos. But one could point out that there is a problem with this line of argument: Just because there’s something worse out there, doesn’t mean that this jaguar’s life couldn’t be better.”I have since discovered the USA has some horrific roadside zoos where animals suffer a lot more than this panther,” Bacon said. “However, that doesn’t make it right.”

A future for B’alam

B’alam was “born at a sanctuary in California, and was hand-reared here,” according to Coover, who, at the time of publishing, was uncertain about which “sanctuary” it was, but it is unusual for births to occur at legitimate sanctuaries.

Meanwhile, a number of actual sanctuaries have come to Bacon, saying they could take B’alam out of the aquarium. “I’ve had a number of offers from sanctuaries who would take the animal,” Bacon said, “but sadly the owner is clearly more interested in abusing animals for profit.”

“He lives in a fishbowl,” Wang said. “How would you feel if someone came up to your house and banged on the windows all day?”

If you agree, click here to add your name to the petition for B’alam. To tell the aquarium what you think they should do, you can contact them at (214)720-2224 or info@dwazoo.com.