Beacon was born to a breeder and sold to a family who was told he was a “mini pig.” The breeder told the family that in order to keep Beacon small, they should only feed him very, very small amounts of food, and they should also keep him in a smaller space in order to stunt his growth. His family took this terrible advice — and kept Beacon in a fish tank. 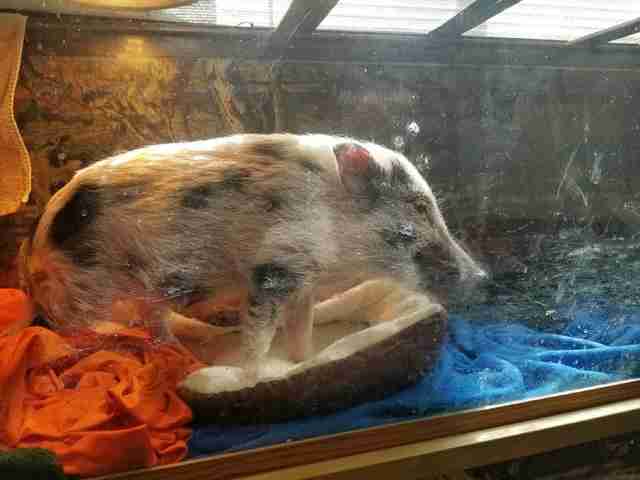 After a while, Beacon’s family decided he was too much for them to handle, and put an ad up on Craigslist asking for someone to take him. Someone came across the ad and posted it in a pig group on Facebook, and that’s how Beacon’s future new family found out about him and became determined to help him.

As soon as Anna Hoffman saw the ad and the pictures of poor Beacon, she knew she had to help him. She already had one pig living in her house and hadn’t been planning on getting another, but Beacon was in such a dire situation, and she knew she wouldn’t be able to stop thinking about him until he was safe. The next day, she and her husband got in their car and to go and rescue Beacon. 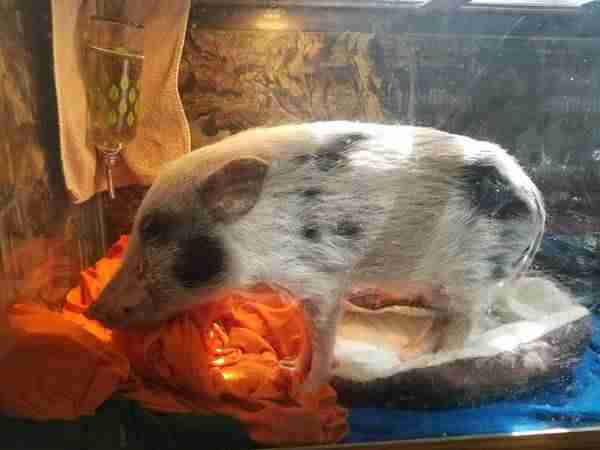 “When I picked Beacon up, I was in complete shock,” Hoffman told The Dodo. “The pictures I had seen were awful, but in person it was even worse. His hooves were about 3 inches long and he couldn’t even walk properly. He was so skinny, all you saw was bone. He was terrified of everything. I tried to offer him a small piece of cookie to see if he would come near me but he wouldn’t.”

Poor Beacon had been so mistreated that he was absolutely terrified of everyone and everything, and it was a struggle for Hoffman and her husband to get him into a crate so they could take him home with them. They finally made it work, though, and got Beacon to his new home, and the next day Hoffman rushed him to the vet to begin his recovery journey. 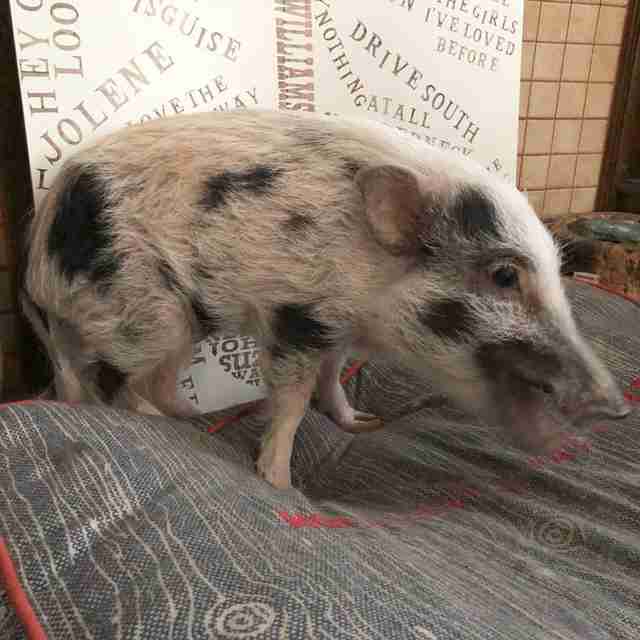 When Beacon and his new mom arrived at the vet’s office, everyone was shocked by just how small and frail the poor pig was. The vet did X-rays, blood work and a thorough exam, and was relieved to find that, besides being severely underweight, Beacon didn’t appear to have any residual health issues from his neglect. But Beacon only weighed 11 pounds, and because he’d been deprived of food for so long, Hoffman had to introduce the correct amount of food and water to him as slowly as possible, in order not to shock his system and make him even sicker. 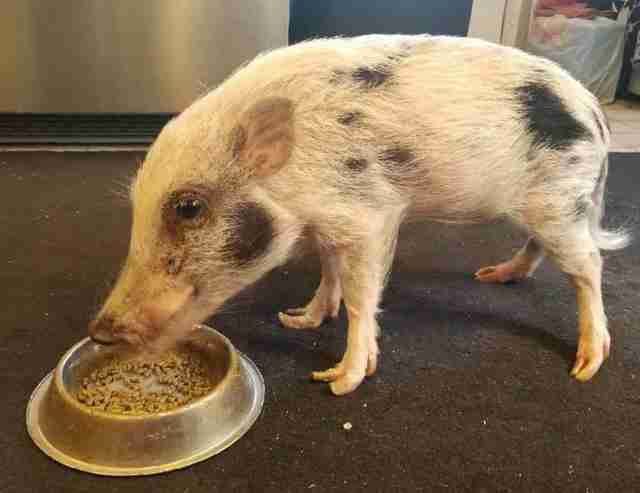 Besides his weight, Beacon also struggled with major anxiety and trust issues. When he first arrived in his new home, he was so scared of his family, and it took his mom a long time to show him that he was finally in a safe place where everyone just wanted to love him.

“When I first got him, he was terrified of anyone and everything,” Hoffman said. “I spent hours and hours sitting near his crate, talking to him and trying to pet him. I would put his crate near me and leave the door open so he could venture out at his discretion.” 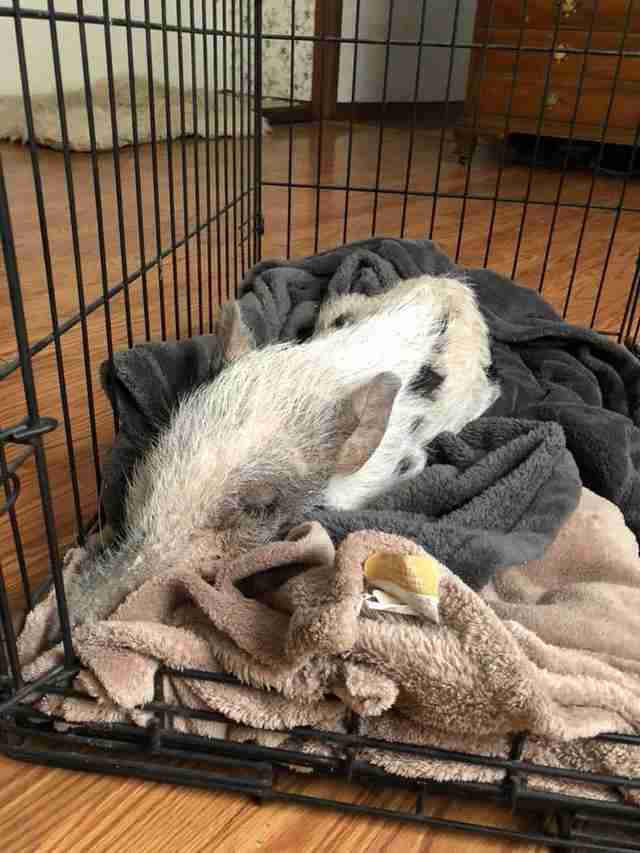 It took a lot of time and dedication, but eventually, Beacon began to come out of his shell and learn to trust again — and today, he’s basically a completely different pig. 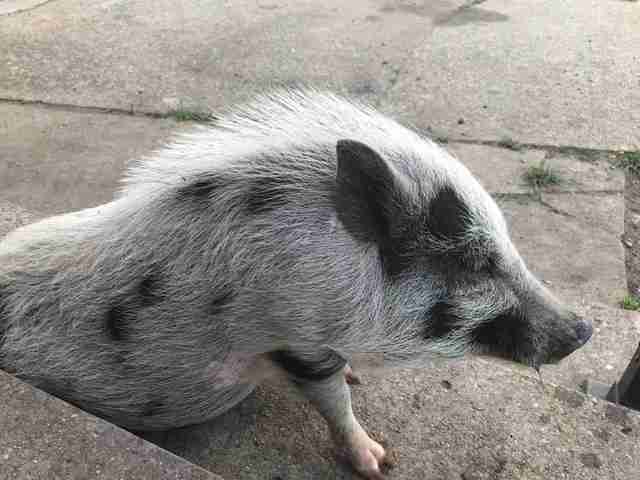 Now, Beacon doesn’t look anything like the skinny, scared pig he was when he was first rescued, and his personality is completely different too. He’s still a little jumpy sometimes and doesn’t always love being pet, but he still loves everyone in his new family, and spends his days running around outside, rolling in the grass and playing with his best friend, his pig sister Charlotte. 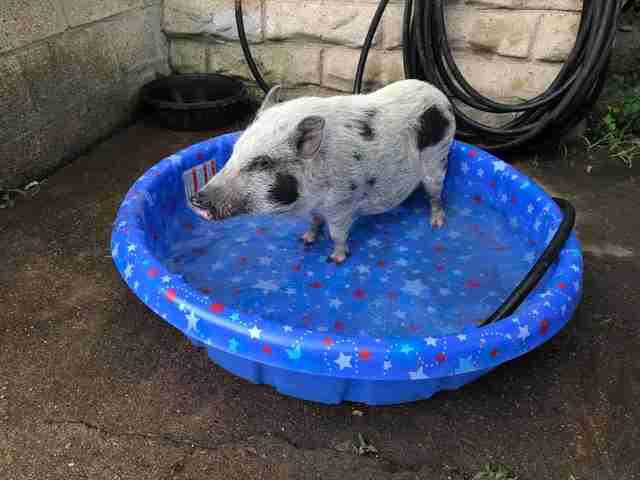 “He loves eating grass,” Hoffman said. “Probably more than most. I think it’s because it’s so new to him. I don’t believe he ever saw grass the first two years of his life. When I sit outside with them, he eventually comes and lays at or on my feet. The fact that his tail is constantly swishing back and forth warms my heart.” 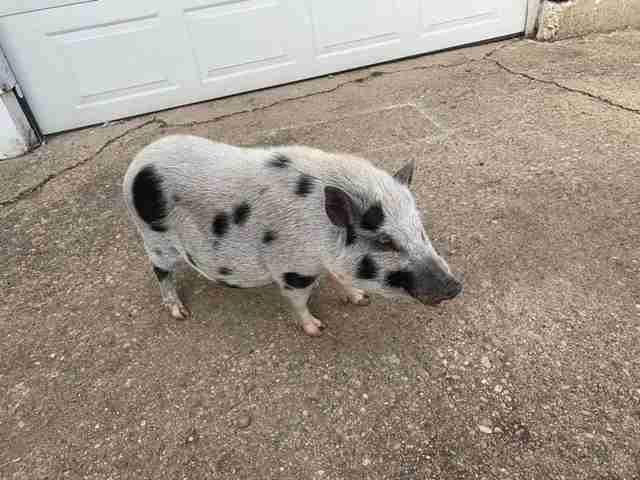 Beacon has gained so much weight since he joined his family, and is finally healthy and happy. His family has done everything they can to make sure he has the best life possible, including educating people about “mini pigs” and how they aren’t a real thing. 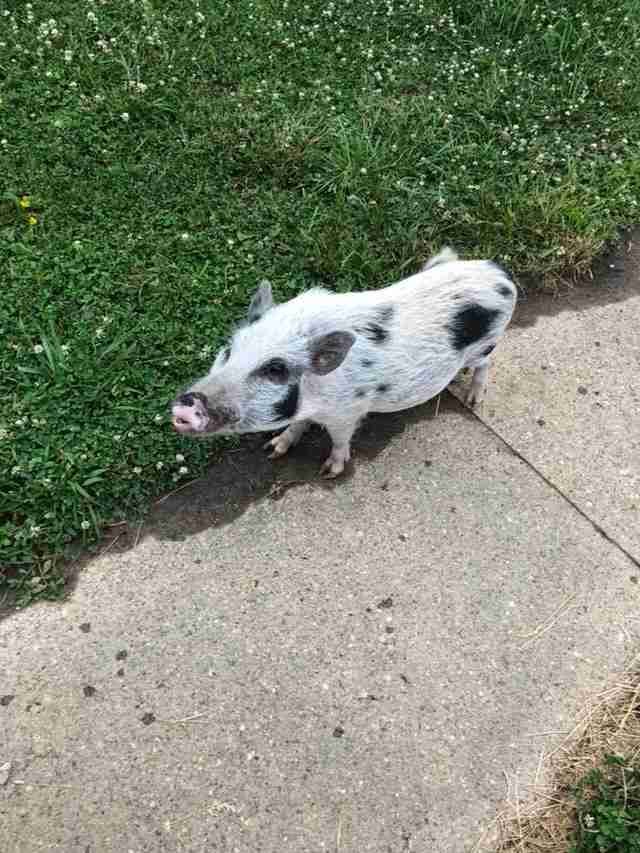 “Our mission is to spread awareness every single chance we can that there is NO such thing as ‘micro,’ ‘teacup’ pigs,” Hoffman said. “That is just a lie that breeders tell. I like to tell people that in terms of growth, pigs are like humans. We don’t know what size and shape we will grow up to be and pigs are the same.”