There’s also an “arena” where live reptiles will kill each other — and people aren’t happy.

Update 9/25: The Guggenheim has canceled these exhibits, citing threats of violence against participants as the reason.

“Out of concern for the safety of its staff, visitors, and participating artists, the Solomon R. Guggenheim Museum has decided against showing the artworks Dogs That Cannot Touch Each Other (2003), Theater of the World (1993), and A Case Study of Transference (1994) in its upcoming exhibition Art and China after 1989: Theater of the World,” the museum said in a statement Monday. “Although these works have been exhibited in museums in Asia, Europe, and the United States, the Guggenheim regrets that explicit and repeated threats of violence have made our decision necessary. As an arts institution committed to presenting a multiplicity of voices, we are dismayed that we must withhold works of art. Freedom of expression has always been and will remain a paramount value of the Guggenheim.”

Previously: The Guggenheim Museum in New York City is about to exhibit a video that shows eight scarred pit bulls, described as “fighting dogs” by the artists, facing each other on treadmills — a tool commonly used to train dogs for fighting. The dogs run at each other into exhaustion. 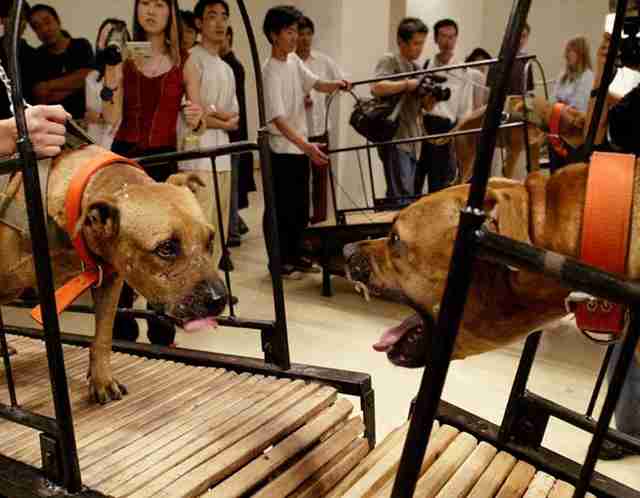 The video, called “Dogs That Cannot Touch Each Other,” was created in 2003 by Sun Yuan and Peng Yu — a pair of Chinese artists who regularly collaborate. It began as a live performance — the dogs were “installed” on their treadmills in a museum in Beijing. (The Dodo reached out to the artists to ask where the dogs came from, and what happened to them after the performance, but has not gotten a response.)

A seven-minute video of one of the performances will be shown at the Guggenheim in October as part of an upcoming exhibition titled “Art and China after 1989: Theater of the World.” You can see stills from the video on the artists’ website.

The exhibit will also feature a piece by Huang Yong Ping titled “Theatre of the World” — a large turtle shell filled with live reptiles and insects who will fight and eat each other throughout the duration of the show. A New York pet store will be sending a continuous supply of animals to the museum to replace the dead ones. 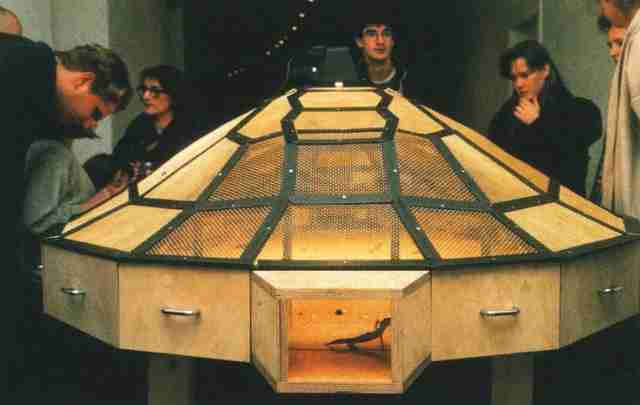 “Animal cruelty is a serious issue. I would expect a prestigious institution like the Guggenheim Museum to stand against cruelty,” artist Sophie Gamand told The Dodo. Gamand, the photographer who famously put pit bulls in flower crowns, has now started a social media protest using the hashtags #TortureIsNotArt and #GuggenheimTortureIsNotArt.

The museum calls Art and China “an interpretative survey of Chinese experimental art framed by the geopolitical dynamics attending the end of the Cold War, the spread of globalization, and the rise of China.”

Pamela Reid, vice president of the ASPCA’s anti-cruelty behavior team, told The Dodo her organization opposes the use of animals in art when the animals will be in pain or distress or injured.

When it comes to depicting dogfighting in art, Reid said, “practices directly associated with this illegal activity should never be showcased unless with the explicit intention of eradicating dogfighting from our culture.” 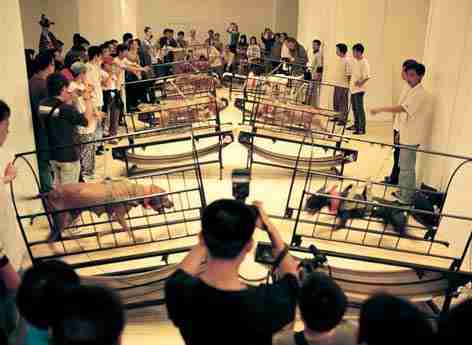 While art critics have described the exhibit in language both lofty and sterile, most have ignored the obvious issues relating to animal welfare.

Just this week, for example, the New York Times wrote an admiring preview called “Where the Wild Things Are: China’s Art Dreamers at the Guggenheim” in which the dogfighting video is described as “one of their [the artists’ ] less radical pieces:”

The seven-minute video shows four pairs of American pit bulls tethered to eight wooden treadmills. The camera closes in on the animals as they face each other, running at high speed. The dogs are prevented from touching one another, a frustrating experience for animals trained to fight. The dogs get wearier and wearier, their muscles more and more prominent, and their mouths increasingly salivate … “The piece was so special, it stood out,” Ms. Peng said. “The art critics didn’t know what to say.” 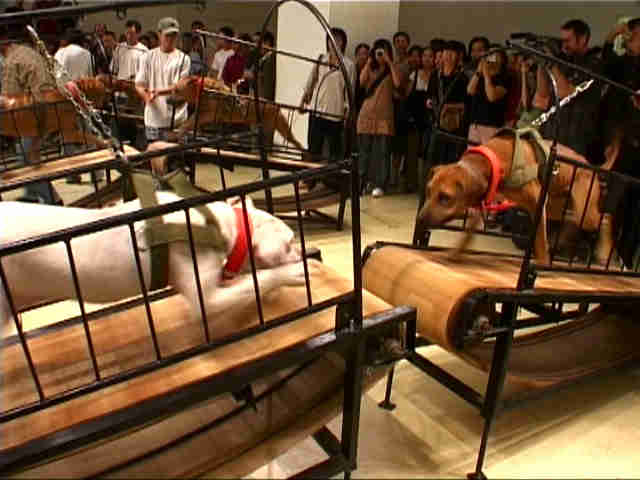 The artists themselves have maintained that “Dogs That Cannot Touch Each Other” is not cruel — though their reasoning relies on myths and stereotypes about pit bulls. In an interview published in the book “Deconstructing Contemporary Chinese Art: Selected Critical Writings and Conversations, 2007–2014,” Yeng said, “Were the dogs being abused? The answer should be no. These dogs are naturally pugnacious.”

The same artists also once displayed a live tiger inside a small cage at a gallery.

“With the plethora of talented artists in the U.S. and beyond, it is a shame that the Guggenheim intends to highlight one exhibit that glorifies a practice associated with dogfighting and another that features animal suffering — all for the sake of shock value,” Ashley Mauceri, law enforcement outreach director for the Humane Society of the United States, told The Dodo.”The animals being used in this ‘artwork’ all deserve better.” 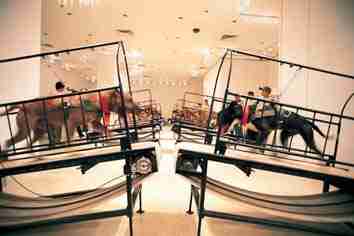 Another exhibit that’s been called into question is Xu Bing’s “A Case Study of Transference,” featuring mating pigs whose bodies have been stamped with what’s described as “gibberish.” The Guggenheim will be displaying a video of a previous live performance.

An online petition, primarily focused on “Dogs That Cannot Touch Each Other” but also raising concerns about the other works, had garnered more than 20,000 signatures by Friday morning.

The Guggenheim did not immediately respond to The Dodo’s request for comment, though it did release a statement about the exhibit. 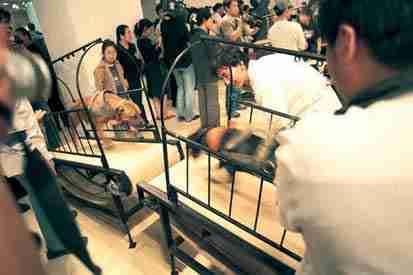 While the “work may be upsetting,” the museum said, “the curators of the exhibition hope that viewers will consider why the artists produced it and what they may be saying about the social conditions of globalization and the complex nature of the world we share.

“Sophie Gamand isn’t satisfied. “Art has a long history of blurring the definitions of what’s ethical and what’s legal,” she said. “But when it comes to the actual torture of living, breathing creatures who haven’t consented, the line should be very clear.” 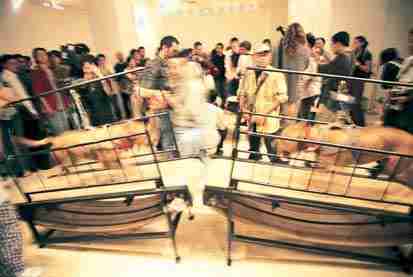 Couple Does More Harm Than Good For Rescued Orangutan

Abandoned Pony Dearly Misses Mom. Then Rescuers Give Him a Teddy Bear to Cuddle With