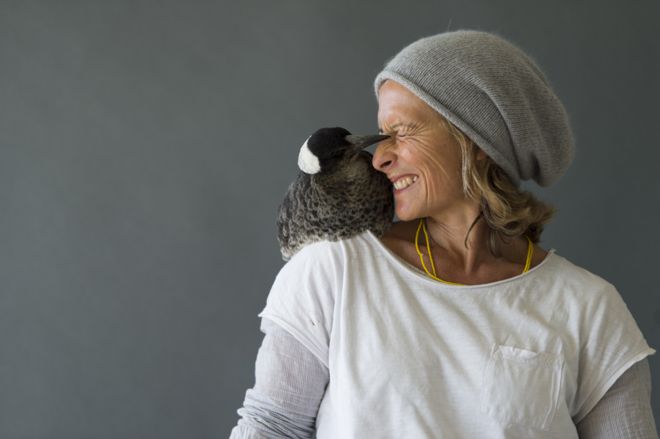 Sam Bloom fell into a deep depression after a fall from a roof terrace during a family holiday left her paralysed from the chest down. But help was to come from an unexpected source – a magpie chick which had fallen from its nest. When the family took in the bird, it brought joy back to their home and allowed Sam to make a new start.

Sam Bloom doesn’t remember falling. The last thing she remembers is admiring the view from the terrace of their hotel in Thailand.

It was January 2013 and she was on a family holiday with husband, Cameron, and their three young boys in a small coastal village on the Andaman Sea.

After a morning swim in the sea they discovered the hotel had a rooftop terrace and all bounded up the stairs to take in their surroundings.

Suddenly Cameron heard a tremendous crash. He turned around and Sam was gone – as was the railing she had been leaning against.

He ran over and saw Sam lying on the concrete floor, two storeys below – a fall of about 6m. Cameron screamed and ran down. When he reached Sam he saw that she had bitten through her tongue and her eyes had rolled back into her head. “She had this huge lump on her back and I realised that she had probably done some really horrific damage to her spine,” he says.

There was no time to shield the boys from the sight of their mother’s injuries. Cameron remembers hearing Rueben, the eldest, asking: “Is Mummy going to die?”

“I knew she was alive but the blood started seeping from Sam’s head and I really worried that her head injury was going to cause her death,” says Cameron. 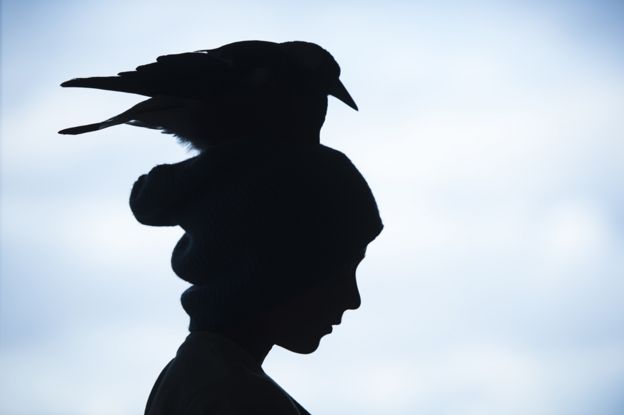 When Sam woke up she was strapped to a board in the local hospital, where doctors took an X-ray and shook their heads.

On arrival at a larger hospital, four hours’ drive away, Sam’s blood pressure was too low to operate. Her skull was fractured in several places, her brain was bleeding and bruised, both lungs had ruptured and one had collapsed completely. Her spine was shattered just below the shoulder blades.

But four days later the surgeons were able to operate, and she pulled through.

Six weeks later, Sam was strong enough to be flown back home to Australia, where she was finally given an MRI scan – and a prognosis. “The doctor came in and said: ‘On a scale of moderate to severe, you’re severe,'” says Sam.

“It was the worst thing anyone ever said to me. I pulled the sheet over my head and burst into tears. And I never saw him again.”

Sam fell into a deep depression.

“I was so angry. I’m still angry to be honest. I was also really angry at myself.”

She couldn’t believe that she had leant on that safety rail – the wooden posts supporting it had been rotten through and through.

The next six months in hospital were tough. Cameron and the boys often found Sam crying when they came to visit. Meanwhile Cameron was adapting their house on the beach in Sydney to accommodate a wheelchair. “We really looked forward to the day that Sam came home. We thought that everything would be much better and her spirits would lift,” he says.

The opposite turned out to be the case.

When Sam came home she was immediately confronted by everything she could no longer do. Surfing and running on the beach had been a big part of her life – and the house looked out on to her favourite surf spot. 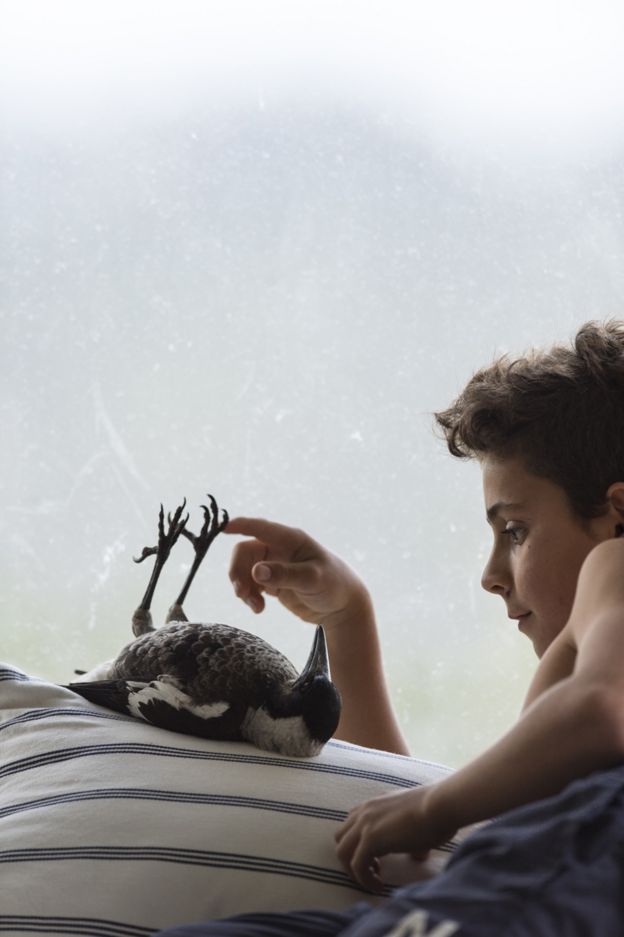 But three months later something unexpected happened. Sam and the boys were visiting her mother. It was a very windy day and as they were heading home Noah, her middle son, spotted a baby magpie that had fallen to the ground. So they picked it up and took it home.

“We called her Penguin because she looked like a penguin,” says Sam. “She was just white and fluffy and had really big feet.”

At first they thought she had a broken wing, but it turned out she hadn’t. She was just very fragile at two or three weeks old.

A vet told them it was a big commitment and that she would have to be fed every two hours, but they decided rescuing this little bird would be a great thing to do together.

“I loved having her around because she was like company,” says Sam. “She was pretty much on my lap or on my shoulder from the moment we brought her home. She was just company and she’d make us laugh.”

Sam could finally unburden herself without feeling guilty.

“I don’t think Cam wanted to hear it any more. Penguin knows it all.”

Penguin could be quite moody, says Cameron. “Some mornings she’d be cross and give you a little peck on the hand – at other times she would just run down the hall and jump up into bed, work her way into the doona (quilt) and then roll over and sleep. So it was hysterical.”

The boys played with Penguin by throwing her a small stick or a sock, which she’d catch.

“They loved her,” says Cameron.

He soon found himself taking pictures of the quirky magpie. “Penguin provided so many crazy opportunities to take photos,” he says. He created an Instagram account for her and she soon had thousands of followers. 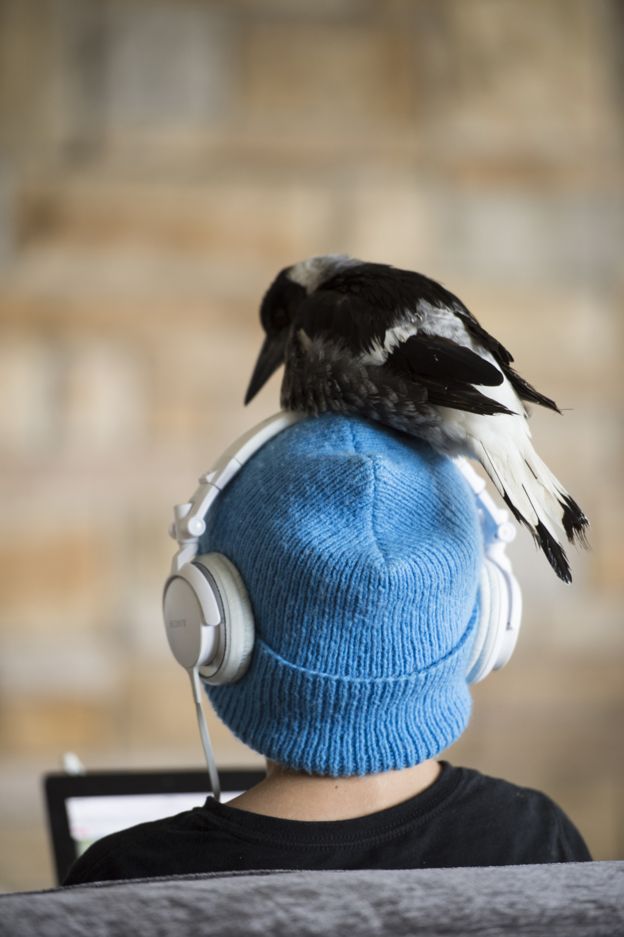 Penguin roamed free but there were drawbacks – she was not toilet-trained, and the house got quite messy. As she grew older, the family tried to encourage her out into the garden.

Eventually Penguin did sleep outside, but at six o’clock in the morning she’d be at the back door, with a special call that meant, “Let me in!”

As her independence grew, she stayed away for longer periods and one summer, when she was a year old, she disappeared for six weeks. The family were distraught. But on the day of Rueben’s 13th birthday, Penguin made a surprise visit. She stayed for another eight months.

A year ago, she left and hasn’t been seen since.

The rescued bird has found her freedom – and Sam has a new-found freedom of her own.

Three years ago she took up kayaking and last summer she made the Australian para-kayaking team.

“I’m out of the wheelchair, I’m in the water and back in nature, which I missed.”

Over the two years that Penguin stayed with the family, Cameron, a professional photographer, took about 14,000 pictures of her. The photographs went viral but nobody knew about the family’s struggle.

This story has now been told by the author Bradley Trevor Greive, in a book filled with Cameron’s pictures.

It was through the book that Sam first found out how her sons had reacted to seeing her unconscious on that concrete floor.

“I did cry when I read about the accident,” she says. “Noah had hot tears streaming down his cheeks. You feel guilty as a mum putting your kids through that.”

Cameron thinks the magpie rescued the family as much as they rescued her. “Sam was in an incredibly dark place when she came home and when Penguin arrived in our lives it changed the mood in the house. It changed Sam dramatically.”

“Oh I loved her,” she says. “I absolutely adored her.”

Cameron Bloom’s images have now been collected in a book called Penguin Bloom, which also tells the story of Sam’s accident and recovery.

In the epilogue Sam is candid about living with a spinal injury. “Being paralysed is a little like waking up from a coma to find you are 120 years old,” she writes. “Your family and friends want you to be happy that you are still alive, but everything you do is very slow and very painful, and so much of what you enjoyed most, the things that actually made you feel alive, are now quite impossible.”

She says she got through it thanks to her family, exercise and yes, the friendship of a bird – as the promotional video says, “Angels come in all shapes and sizes.”

Meet The Woman Who is Uncovering The Truth Behind The Illegal Rhino Horn Trade, Like You’ve Never Seen it Before

Monkey Finds Abandoned Puppy, Adopts it as Her Own And Protects it From Other Stray Dogs

Pregnant Dog Has Giant Belly, But After 9th Pup Arrives, Mom Realizes She Has A Bigger Secret