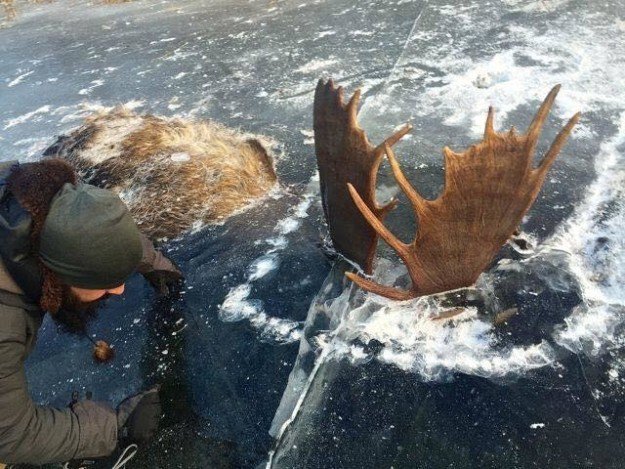 Two hikers found the animals earlier this month encased in eight inches of ice in Unalakleet, Alaska, along the Bering Sea.

“Two bulls got in a tussle over some ladies … and ended up being put on ice,” Jeff Erickson, who was invited to see the moose by the hikers, wrote on Facebook. “The plan is to remove [them] intact for a very unique head mount.”

In fact, Erickson wrote a few days later that the moose had been removed from the ice. “Now to get them cleaned up,” he wrote.

Finding and removing the moose was “likely [a] once in a lifetime experience,” he added.

The moose was first found by Erickson’s friend Brad Webster, a science and social studies teacher who was touring the grounds of a Bible camp that he maintains with a friend named Chris, who was new to Alaska.

The moose most likely were battling over territory or access to a female when they got their antlers stuck together, the friends noted on Facebook. Males tend to be most aggressive toward each other during the fall mating season.

There’s a good chance they drowned in the frigid water, which quickly hardened to ice as temperatures dropped, the friends wrote. (See why moose are butting heads on a suburban street).

Bill Samuel, a retired biologist and moose expert at the University of Alberta in Canada says he has never seen anything quite like it, though he is aware that the strength of the powerful animals and irregular shapes of their antlers can occasionally result in tangling that the animals can’t escape.

“This happens rarely when bulls of equal size can’t decide who is boss just by displaying to each other,” Samuel says. (Watch video of tangled moose antlers.)

Entangled moose skulls have been found occasionally, but it’s the first time in recent memory that any have been found in ice, Samuel adds. (Learn about strange ghost moose.)

Male white-tailed deer bucks and elk tend to get their antlers locked more often than moose, Samuel says, although the process is still relatively rare. A similar process has even occasionally been seen in swans who get their necks tangled during a fight.

“I have heard of locked bucks that were basically eaten alive by coyotes,” Samuel adds. “Nature can be nasty.”

Dogs Know You Have Cancer Before You Do