An orangutan clinging to the last standing tree in what was once her forest, newly razed for a palm oil plantation; a mother and baby pangolin holding each other when they are discovered stuffed into a box by smugglers; a New York City boutique busted for trying to sell dozens of objects carved out of elephant ivory — these are just some of the images that show what’s happening to the world’s animals.

And a recent report from the World Wildlife Fund (WWF) confirms a bleak picture of the future unless we take action.

The Living Planet Report, released every two years, shows trends in the global health of the planet — and 2016’s numbers are terrible:

The Dodo talked with Colby Loucks, senior director of WWF’s Wildlife Conservation Program, to try to understand the findings, their consequences and what people can do to help.

“By and large this trend is a negative trend,” Loucks told The Dodo. “If this continues … we’re going to get to the point that two-thirds of the population will be lost.”

Why this is happening

Humans are to blame. The impact human beings are having on the planet will be able to be detected in the earth’s rock strata, the way meteorite strikes or major volcanic changes have been up until now. We are entering the Anthropocene age, the first time ever that a single animal (human beings) will have such a huge impact on the earth, pushing the whole planet toward a sixth mass extinction.

There are two main causes of loss of wildlife. The first is habitat loss and degradation, “like converting a tropical lowland forest to an oil palm plantation,” Loucks said. “The second thing is poaching, or in the case of marine systems, overfishing. Those are the largest drivers of population decline.”

Who’s most at risk

Animals whose populations are decimated because of incessant demand for wildlife products, like ivory, in places like southeast Asia, are high at risk. “So that’s elephants, pangolins, sharks for shark fin soup,” Loucks said.

But it doesn’t stop there.

“The species who require freshwater to survive have declined 81 percent in just over 40 years,” Loucks said, citing “overexploitation, pollution, dams, invasive species and climate change” as the main drivers of this drastic drop.

While freshwater animals might be the most immediately threatened, the decline of these species has had impacts on other animals in ecosystems. We might not even be seeing the extent of these impacts yet. “Freshwater species are very sensitive to these changes, but also other wildlife, [so] when we start to take important freshwater or marine species out [of the system], we see effects on other animals.”

“We don’t even know the long-term effects of micro plastic getting into marine fish. Microplastic gets into larger and larger fish as it is absorbed into smaller sea life. That’s an issue that certainly needs more research,” Loucks said. “How that might impact larger fish and how it could get to us and affect us is an unknown.”

What we can do about it

There are no doubts that the U.S. is one of the largest contributors to overconsumption and pollution on the planet.

But there are things we can do right now to cut down on the harm we’re doing. Here are a few steps you can take:

“Even just packaging material that can decompose would help,” Loucks said, “and just generally producing things better so we don’t have massive amounts of plastics.” 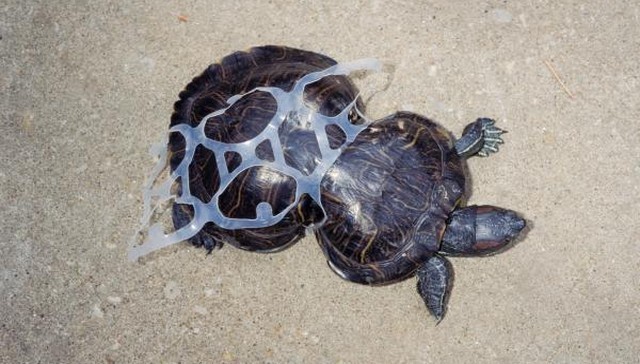 Some researchers expressed doubt about the WWF’s large scale predictions, but they were inclined to agree that if we don’t do something soon, it might be too late to save our wildlife.

“There’s all sorts of things you have to take into account just to accurately estimate how many animals are in one population, let alone average across thousands of species,” Asia Murphy, a researcher at Pennsylvania State University and a member of the Huck Institutes of the Life Sciences, told The Dodo. “But, obviously, there is a problem with species declines. One can see that just by stepping outside and looking around.”

“We as a species are currently overshooting the limits of Earth’s ability to support us and the other species we’re sharing the world with, and we need to work, as individuals and as nations, to come up with solutions to the biodiversity crisis,” Murphy said. “The sooner we get to working on that, the better.”

And Loucks believes the Living Planet Report’s estimates of global populations are helpful in seeing the scale of impact. “This number is a number we’ve been able to track over 42 years. It’s akin to other large numbers, like the gross domestic product, so big numbers do tell grossly what’s happening,” Loucks explained. “So I think it’s a fair thing to use to give a general snapshot of what happening now to our planet.”

“We need to maintain nature for both humans and wildlife — the resources for both are limited,” Loucks said. “We always have ability to change the future, it’s harder to change the past.”

“Children should be motivation for change, Loucks suggested. “It is incumbent upon each generation to leave the world in a better state for the next. There’s no better motivation than looking at your children and saying ‘I want to do better for them.'”

One of the best things you can do right now is spread the word. So share this information with everyone you know.

No One Needs A Tiger. So Why Do So Many People Own One?